Arriving in Italy is exciting. It never gets old; the chaos made up of a nation of people who are always in a hurry. Food – my god, the food. Whether you arrive in Rome, or Florence or Milan – it doesn’t matter, its always exciting arriving in Italy. For me, the big one is obviously cars. I do regard Italy as the world capital of the car.

A little bit of this is because I happen to be particularly nuts about Italian cars. Yes, Alfa Romeo, Ferrari and Maserati and the histories that they’ve all left are indelible on the history of the motorcar fundamentally, and the exploits of the personalities in racing and in design from the early 20th century and into the post-war years make for some of the most emotive reading on the subject from anywhere. However, there is one thing about Italy and their cars that is both the best and the worst thing at the same time; FIAT.

I’m mad for Fiats, always have been. Laugh if you like, but there’s something irrational and bonkers about going fast in a small Fiat of nearly any period. Even humble, twin-cylinder 500s – driven on a wide-open-throttle all day long. Rented Fiats have been a source of fun on many occasions as recently as last year, getting along the Milan – Bergamo Autostrada in a Panda 45, at a speed that’d have me locked up in Australia seemed altogether normal there, in Italy. Fiat as a company had a soul, and perhaps it still does but it was a company – a car company that had a couple of things that most other, very big car companies didn’t have; a family behind it – in fact, Fiat had a Dynasty – and a headquarters that was iconic. Iconic not just as a place that was a source of ideas or a figurative “place with a name”, but an icon of a building; The Lingotto in Turin. Fiat has been regarded for a long time as the industrial backbone of Italy. The Agnelli family, that Dynasty behind the company has been a decision making machine that has shaped Italy’s fortunes; good and bad. The old saying was popularised; “when Agnelli trembles, all of Italy trembles”. Their reach and influence was immense, and all you need to do to understand it is look at the production of the cars the company made, and how broadly they were built under license – from Spain to Russia, the Americas and even France, right next door – built Fiats under license. But I digress, because the purpose of this was to talk about a place.

In the 1910s, the Agnellis saw that to achieve real volume in production of their cars, they would require a new and strong, state of the art facility. The Agnellis visited America to see how things were done in Detroit and realised that to capitalise and expand on car production, with their coffers full of cash from having turned their hand to armaments during World War One – they would have to build a factory that would be the best and biggest in Europe.

Giacomo Matte-Trucco was the architect commissioned for the project, and the result would become his Magnum Opus, a monolith that would be described by none other that Le Corbusier himself as “one of the most impressive sights in industry, in the world”. 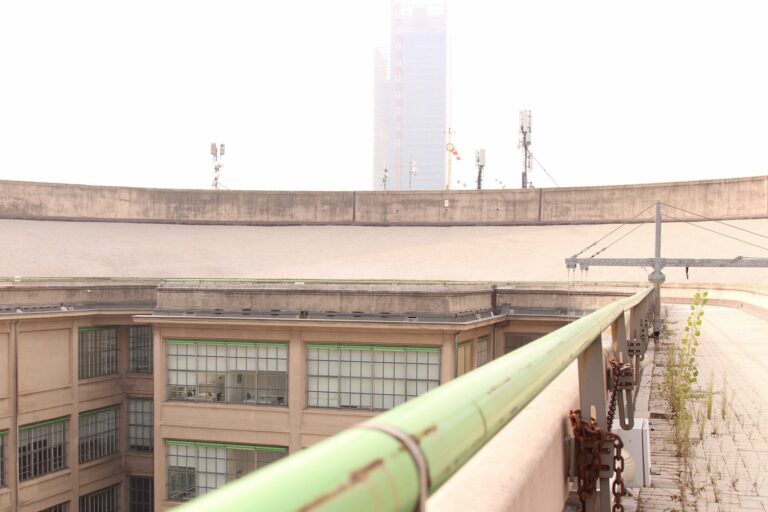 The completed Lingotto comprised 16,000,000 square feet of floor space over five stories, with a pair of reinforced concrete, helicoidal ramps at each end of the five hundred metre long building. The idea here was fundamentally basic; raw material goes in at the ground, and completed cars emerge on the roof. In fact, that roof – the iconic part? A test track, where the cars literally emerged from the end of the production line and were driven several times around the kilometre-long banked track, before descending the ramps to be loaded for their eventual retail destinations.

The building contained literally everything from foundry to trimming department, and its presence is like nothing I’ve ever seen in industrial terms. Today, one arrives via the Turin Metro, at Lingotto-Fiere train station. You emerge from the subway disorientated. At street level it isn’t clear that the train you alighted from is effectively underneath the great monolith. But indeed it is the case, Matte-Truco’s great detail with great, broad stair cases that would’ve taken thousands of workers into the building daily, now doing the building service as the entrances and exits from what is now a shopping precinct. 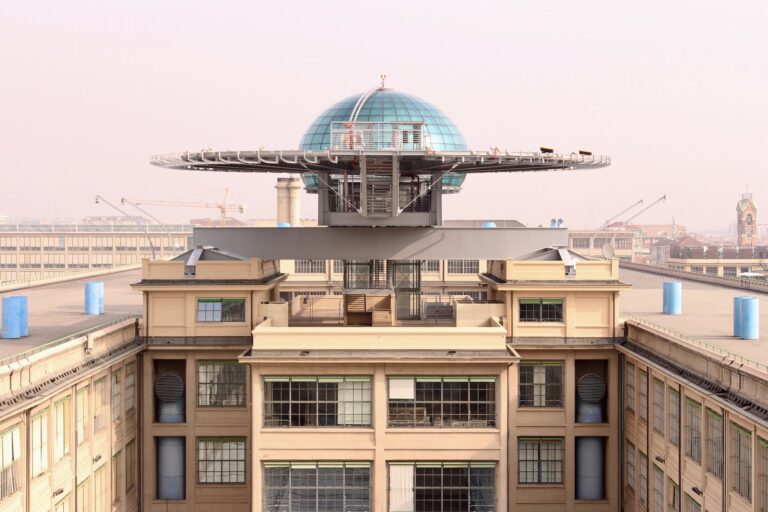 I stood at ground level of this amazing sight thinking that nearly every Fiat from 1923 till 1982 emerged from this building – over 80 different models were constructed at Lingotto. Where I really wanted to go though, was the roof and the famous test track. Nearly 100 years old, and still absolutely in tact.

Against all odds (the access lobby, lifts and staircase were all closed for renovations on my visit), I managed to access the roof with the help of the building’s security staff. Once up there, you’re immediately struck with the size, and the height of the banking at each end. The view of Turin is utterly spectacular, as is the view into the atria that offers a view of the building’s construction unlike you’d ever see of many. 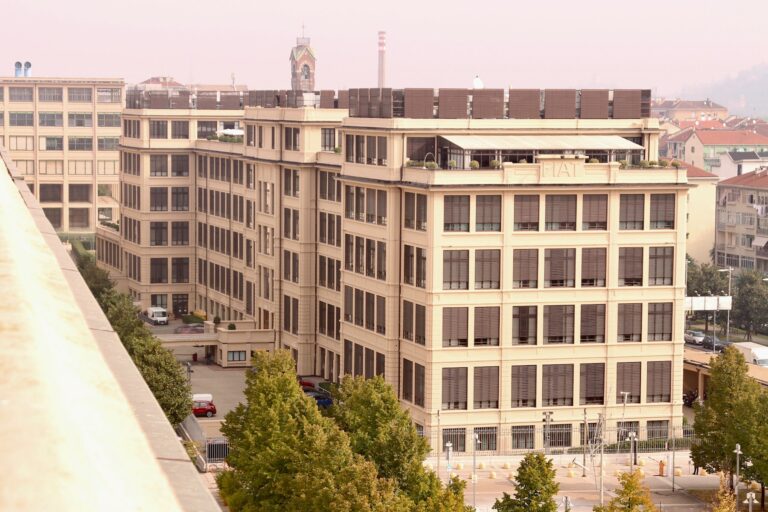 Anyone who’s ever seen the original Italian Job and remembers the Turin getaway scenes will remember the three Minis speeding around the track, pursued by a brace of Carabinieri in Alfa Romeo Giulia Saloons. The construction of the concrete ramps could almost be described as intricate, the whole building in fact having a purposeful, but decorative feeling about it – a metaphor for some of the cars that left there.

What struck me most though was the relevance of it all to Italian cars. I always think and talk about cars in the vein of their importance individually as part of the built environment, and as time-markers of design. And here’s a building that was the place that built millions of them, in a country that is absolutely about the substance of industry. This was like a blueprint for modern existence in 1923 – A defining company for Italy, with a defining product – really, in some ways part of the modern Italian identity are cars like the Nuova 500, and the Panda and the124 saloon. All these cars poured out of the Lingotto. It’s significance as an architectural structure was like the cars that came out of it, significant. Avant-garde for its time, and utterly a landmark physically and figuratively for the importance of Fiat to cars, all over the world. 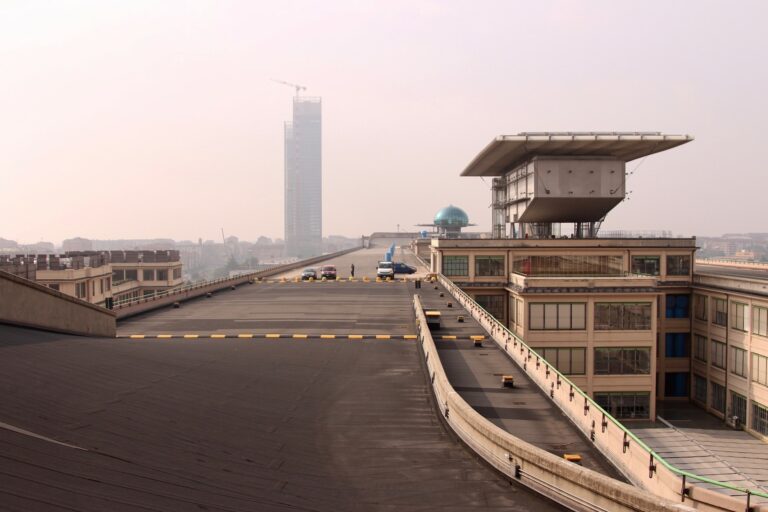 Glance at your watch. Now think about everything you’ve done in the last 24 hours – including some sleep, three meals and all the usual things that you’d fill a …

In the past few years I have found myself becoming increasingly less interested in the “supercar” – that special breed of exotic and expensive street-legal bank-busters. Coincidentally I was never …